What are common use cases for using a temperature sensor in predictive maintenance?

Various industries, including automotive, petrochemical, and aerospace, use temperature sensors as part of predictive maintenance. Most pieces of equipment don’t fare too well when temperatures get too high or too low, so using infrared (IR) imaging, thermocouples, or even a simple thermometer can be useful for detecting issues.

Note: In each of these cases, the function of a temperature sensor varies slightly depending on the asset being monitored.

If the temperature dips below 32°F, it will cause product to freeze up. Below-freezing temperatures in a commercial refrigerator may indicate a problem within the system.

Many products need to be kept at very consistent temperatures. If those temperatures shift unexpectedly, you’ll know something’s wrong.

A simple example is a freezer. A freezer’s whole function relies on maintaining a consistent temperature, so the sensor would be used to tell if the internal temperature deviates from normal.

Thermal imaging can warn of leaks where insulation might be wearing out.

Infrared imaging can be used to find areas where warm or cool air may be leaking from a building.

IT components such as servers and computers can be damaged if they overheat. High readings on a temperature sensor might indicate a faulty fan or poor electrical component.

Solar cells that aren’t functioning properly will often stand out on thermal imaging.

On the other hand, temperature isn’t core to the function of a bearing system, but if things get too hot, it can indicate something else is going wrong. In this case, the sensor is used to pick up a sign (increased temperature) that the system is unbalanced or poorly lubricated.

In any of these cases, you can use the sensor in predictive maintenance by setting specific temperature ranges in your CMMS program. If the sensor reports temperatures too high or too low, you’ll get a notification letting you know that maintenance needs to be done. 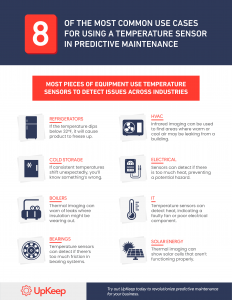 Criticality analysis is a measurement used to prioritize assets in maintenance planning, combining the seriousness and frequency of a potential failure.

How can my facility use acoustic analysis?

Acoustic analysis has fewer applications than PdM-tool vibration analysis, but what it lacks in breadth of application it makes up for in effectiveness.