How do we recruit more young people to join the manufacturing industry? 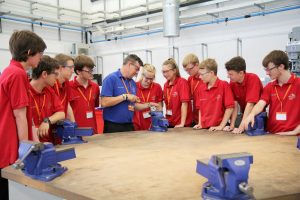 Some of the specific reasons young people have avoided working in manufacturing include:

Note: The key to helping young people join the industry will mean upending these misconceptions and increasing awareness of the opportunities present in manufacturing.

Changes in the industry

Many of the above issues are based on outdated concepts. Manufacturing has seen a great deal of change, and the younger generation should be made aware of the advances that are happening right now in the industry. This includes:

In essence, the industry as a whole is becoming one where skill with technology is more important than simple manual labor. That’s a role young people—who are highly tech savvy—are well suited to fill.

Some of the tactics manufacturers can use when recruiting young people include the following.

By employing a few of these methods, manufacturers could start to attract more members of the younger generation to their facilities and overcome their staffing issues.

Overcoming the Skills Gap in Manufacturing

Employers in manufacturing and other industrial settings are struggling more and more to find skilled labor to meet current workplace demands.

How viable is facility management as a career choice?

The answer to this question is a resounding, “YES!” The facility management field is changing rapidly, creating amazing opportunities for young people

How to Be a Successful Maintenance Supervisor

What are some concrete things you can do as a maintenance supervisor to improve your performance? We answer this question and more.