As early as around the 1590s, people have been fascinated with measuring pressure changes. The first attempts at describing pressure fluctuations began with glass tubes and barometer experiments. These simple instruments measured how much the fluid inside them was pushed or pulled by pressure changes.

Fast forward 500 years to the present, we have come a long way from measuring the rise and fall of fluids in tubes. We now also understand the effects of pressure changes on the physical and electrical properties of materials. Nowadays, it’s easy to measure pressure fluctuations with astounding precision and accuracy – thanks to highly advanced pressure sensors. 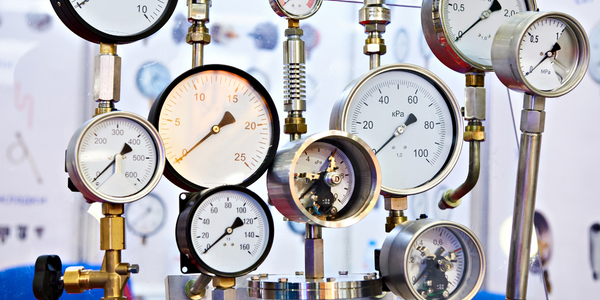 What is a pressure sensor?

A pressure sensor is a device that senses and measures pressure. In this case, pressure is defined as the amount of force exerted over an area. Pressure sensors allow for more specialized maintenance strategies, such as predictive maintenance. These devices collect real-time data on the conditions of equipment. Based on the available information, the sensors can predict and prepare for failure patterns.

By installing pressure sensors to certain tanks and other pressurized assets, the sensors are able to alert maintenance teams when the pressure falls outside of a specified level. This allows the teams to address the issue immediately. A typical example of a pressure sensor in maintenance is a transducer that picks up a signal when pressure is applied to it.

Pressure sensors work by measuring a physical change that happens, as a reaction to pressure differences. After measuring these physical changes, the information is converted into electric signals. These signals can then be displayed as usable data that the team can then interpret. An example of this process will work in the following steps:

The most common type of pressure sensor uses a strain gauge. It is a mechanical apparatus that allows small expansions and contractions, as pressure is applied or relieved. The sensor measures and calibrates the physical deformations to show how much pressure is put on a piece of equipment or tank. Then, it converts these changes into voltages or electric signals.

2. Electric signals are measured and recorded

The electrical signals are now in the form of a pressure reading, in units such as pounds per square inch (psi) or Pascals (Pa). The sensors send out the readings, which are then received by your CMMS in real-time. With multiple sensors installed throughout various assets, a CMMS system acts as the central hub to keep track of the whole facility. CMMS providers can assist in ensuring the connectivity of all sensors. UpKeep CMMS, for example, offers options for the seamless integration of sensors and assets.

With sensors in place, your maintenance teams get alerted when a pressure measurement is too high or too low. Pressure ratings that are too high can indicate a risk of parts rupturing, or a chance of damaged equipment. On the other hand, a loss of pressure can be a sign of leakage, especially on pressure vessels. Real-time data, combined with mobile functionality, give your team a view of the state of the facility at all times.

Pressure sensors can be categorized according to the method they sense pressure changes. Sensors can observe and measure various physical reactions. Some of the most common types of pressure sensors are listed below:

A strain is defined as the proportional expansion or contraction of materials, as an object applies force. Strain gauges, as the name implies, use these tangible changes in the spring’s dimensions to measure pressure.

Strain gauge sensors have a spring element that deforms, as force is applied. The material proportionally varies in its electrical resistance as its structure varies. With pressure changes, fluctuations in resistance and voltage readings are taken as electric signals. These are then calibrated to an equivalent pressure reading and displayed by the sensor.

Strain gauge sensors are particularly favorable for long-term monitoring tasks. They are the most commonly used type of sensor due to their availability and versatility.

Piezoelectric sensors work by employing the piezoelectric effect. The piezoelectric effect describes the generation of an electric charge as a response to physical changes to material. This effect is more evident in certain materials to a degree that can be measured. The charge created is proportional to the applied force. The sensor can measure and calibrate changes in the charge and display a corresponding pressure measurement.

Piezoelectric sensors can come in very small sizes – making it a good choice for applications with space constraints. They also generally allow high frequencies when taking in data. This is an advantage for readings that require dynamic measurements taken between data points with short intervals.

Applications of capacitive pressure sensors include measuring pressure changes in jet engines, car tires, and other vessels. They have a simple mechanical design that enables them to withstand harsh environments.

The earliest devices used to measure pressure comprised of glass tubes filled with liquid. Manometers are essentially that – a tube that uses liquid movement to compare the pressure experienced by its two surfaces. The most basic manometers are U-shaped with a liquid inside that is displaced by varying pressure differences.

Manometers can be used to calibrate other equipment. They are still common instruments found in laboratory settings. Because of their slower response and limited range of pressures, they are not suitable for dynamic pressure sensing applications.

The previous pressure sensors typically work by measuring an applied force to a mechanical apparatus. These mechanical methods can get more complex when the pressure is below atmospheric levels, particularly extreme vacuum pressure levels. For vacuum pressure applications, measurements rely less on mechanical reactions. Instead, the sensors observe and measure the effects on the properties of the materials.

The most well-known sensor used for vacuum pressure measurement is the Pirani sensor, named after its inventor, Marcello Stefano Pirani. The Pirani sensor works by measuring the resistance of a heated filament within a gauge chamber. As the gauge chamber becomes exposed to surrounding vacuum pressure, the temperature felt by the chamber drops. This change in temperature proportionally changes the conductivity in the filament. This can then be taken as an indirect measurement of the pressure experienced.

From the previous types of sensors, we have seen how the physical deformations, due to an applied force, measure pressure. The Bourdon tube is an ingenious mechanical device that uses physical movements. It harnesses the surrounding force to drive a dial that is calibrated to display a pressure reading.

Bourdon tubes are made with a tube coiled into a C-shape. One end is closed, while the other is exposed to the surrounding that is being measured. As the pressure felt by one end of the tube increases, the coil tries to straighten. Coupled to a spindle, this physical motion of the coil moves a pointer to show the pressure reading on a dial gauge.

Due to its simplicity and ruggedness, Bourdon tube gauges are usually inexpensive, yet durable. They provide accuracy for high-pressure applications. However, due to their purely mechanical nature, readings are susceptible to shock and vibration. It is not advisable to use them on low pressures requiring precise measurements.

An aneroid barometer is another type of a purely mechanical device used to measure pressure. This instrument has an air-tight metal cylinder, resembling a capsule. This capsule compresses and expands in response to the surrounding pressure. These small differences can be measured and coupled to a dial that then displays a corresponding pressure reading.

Popular use cases for pressure sensors

Pipeline or hydraulic systems can operate at extreme pressures. Natural gas pipelines for example, typically operate anywhere from 200 to 1500 psi.

Another example is wire-braided hydraulic hoses which can have typical working pressures of 6000 psi. Pressure sensors can help ensure that these systems are working below their limits to maintain an acceptable factor of safety.

Monitoring pressure readings throughout a facility ensures that standards are met. Not only does this apply to production standards, but also it includes safety standards. Electronic transmitters allow data to be sent across remote locations of a facility.

Vacuum technology is the backbone of some of the most advanced industrial and scientific processes. It is used for composite molding production, semiconductor processing, flight instrument manufacturing, and various medical applications. Such processes can require specialized pressure sensors that allow vacuum pressure measurement to upwards of 10000 psi.

The earliest applications of pressure sensors had ties to the environment, particularly in weather forecasting. Today, these environmental applications can expand to also include energy conservation. Pressure measurement devices can also be used in emission testing, pollution devices, and wind management systems.

The rise of high-tech equipment paved the way for high-precision manufacturing. Precision measurements need to keep up with production processes that are being improved every day. Pressure sensors allowing more sensitive measurements are required for airflow measurements, clean rooms, laser systems, and more.

Manufacturing processes require the manipulation of fluids, such as that in hydraulic and pneumatic systems. Pressure sensors detect any anomalies within these systems – constantly checking for leaks, compression issues, and any signs of potential failure.

Pressure sensors can save your business time and money

Imagine having the power to look into the future. Now imagine using that power to come up with a maintenance plan in time to prevent breakdowns from occurring. That’s essentially what pressure sensors, as tools in predictive maintenance, are trying to do.

Pressure sensors don’t stop at sensing pressure changes. They make the information useful by sending the data to your CMMS. This allows you to get a birds-eye view across autonomous parts of your facility. By having sensors that send real-time data, your maintenance team can be notified at the onset of any unusual behavior. And why stop with pressure sensors while you’re at it? UpKeep CMMS can help you customize the way you monitor your assets by giving you a wide selection of sensors depending on what you need.

Having a predictive strategy in performing maintenance really pays off. In fact, the US Department of Energy estimates roughly 8-12% savings over preventive maintenance, and up to 40% savings over reactive maintenance. Think of these savings as an added bonus on top of huge safety benefits and increased reliability. Among the leading causes of failure of pressure vessels are operation above allowable pressures, stress, and fatigue. Reduce the risks by using a system of sensors that look into your workplace 24/7.

Most modern facilities are dependent on equipment that use highly pressurized vessels. Equipment breakdown can cause catastrophic failures, due to the high energy that they store. Pressure sensors help to identify risks early by notifying the maintenance teams of any anomalous deviations from ideal working conditions. Combined with a predictive maintenance strategy, sensors allow maintenance teams to perform corrective action before any failures occur.

Predictive Maintenance: What is it? [Types, Comparison, & Benefits]

6 Types of Temperature Sensors Defined and Use Cases

Temperature sensors are devices on machinery that track ambient temperatures, assess readings, and measure the impact of heat conditions

The 6 Sensors for Predictive Maintenance That Optimize Repair Timelines