How did World War II influence the spike in manufacturing?

Post World War II, the world saw a massive economic spike. This can be attributed to increased demand for products, new technologies, and global sociopolitical factors. A major part of that was an increase in manufacturing production throughout the world, and most notably in the U.S., France, West Germany, Italy, and Japan.

How did this spike happen? There were a number of factors involved that we’ll look at here. 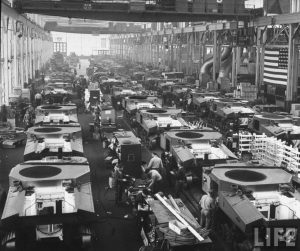 Before WWII (and after WWI), the world was going through a depression. The Great Depression had increased unemployment in the United States to 25%, and other nations were suffering as well.

This economic depression had left factories empty, which set the stage for the resurgence in production during and after WWII.

The war’s impact on manufacturing in the U.S.

A tank factory in the United States, photographed in 1942. Image Source

The United States saw an incredible economic shift after the war. Some of the factors that contributed to increases in production included the following:

During the war, there was increased demand from businesses to manufacture supplies for the war effort. Factories filled up, and production skyrocketed. Between 1939 and 1944, the nation’s gross domestic product increased by roughly 8% each year.

New industries such as computers, television, commercial aviation, and the like were introduced and improved during the war. With new technology comes new production lines, and thus an increase in manufacturing. 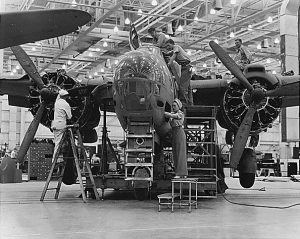 Note: Technology is still advancing at an incredible rate, causing transformations throughout all industries, including manufacturing.

Progressive tax rates were introduced during the war to enable government investment in the war effort. After the war was over, that tax structure persisted, and the government invested in numerous projects, such as the Interstate Highway System in 1956.

Easier access to new technologies and property led to the expansion of the middle class. People lived in greater comfort, purchased more goods, and thereby supported production throughout the nation.

Naturally, the war’s impact extends well beyond the United States. Many of the advances in technology and production seen in the U.S. were also seen in Europe and Japan, causing increases in industrial production.

The spike in manufacturing was also helped by the increased cooperation seen among nations. Several countries formed the European Coal and Steel Community (ECSC), which helped facilitate modernization and reduced costs to its members.

The ECSC was the foundation for the United Nations, which formed later on.

Additional factors that affected production include:

Ultimately, the spike in manufacturing after the war resulted from:

That spike lasted until the 1970s, and it has affected manufacturing to this day.

Does our society today put too much of an emphasis on innovation rather than maintenance?

I think it’s great to push the limits of what’s possible and advance our technology forward. But we might be neglecting proper maintenance.

What are some of the future innovations in facility management?

Here are some cool trends that are already being adopted by the leaders in the facility mangement industry - Virtual Reality, Robotics, Internet Of Things.

What are the top 10 hotel chains in the United States that are innovating maintenance?

Marriott International, Ritz-Carlton, and Hilton Hotels are the top three hotel chains in the United States innovating maintenance through technology,